What are We Looking For?

John the Baptist had been preaching and prophesying his heart out in the desert and, remember, was also the one who had baptized Jesus.  He had witnessed the Holy Spirit descending on him in the form of a dove.  Now he, John, was imprisoned, a turn of events that didn’t seem to be part of the plan for the arrival of the Kingdom of heaven on earth in the form of the messiah whom he thought he had identified!  What had happened to the promise of a better future?

Distraught, John sent his disciples to Jesus to find out.  Are you or are you not the one we were waiting for?

Recall that both John’s and Jesus’ disciples were expecting political change – they wanted to get rid of Roman domination!  That was the major issue of their day.  Throughout Jesus’ ministry they had immense difficulty understanding that Jesus was trying to get them to understand something much bigger than the politics of the day.

What are we looking for, in the desert of our daily lives?  What do you think is going to happen?

Why do we show up for church services?  What are we looking for during this advent season?

Are we looking for Christ, for where He is, for His presence?  Are we looking for evidence of God working in the world?  In the Church?  If so, and I would like to assume that, then what would God’s presence look like?  How would we know it?

Jesus did perform astonishing healings the likes of which we rarely if ever experience in this day and age, perhaps partly because we don’t much believe in their possibility.  Having said that, I do know of people who have experienced remarkable improvements in their health and well-being when they have prayed for help and when others have prayed for them.  There are even scientific studies of the effects of prayer now.

And there are a lot of people who have told of coming back from death – near-death experiences – when the medical community had given up on them.

But generally, our society and the age in which we live tells us to not trust these accounts, although I too have experienced remarkable improvement in my ability to see more clearly, for example.  In part, this has been because of changes in how I see what is possible and how my own fear and other limitations have an impact on my well-being.

And there are many indications in the Gospels that Jesus’ healings included people’s mental and emotional orientation and the implication that this is involved in being well.

However, although it is often very difficult for us to surrender to the truth of being sick at times and to the fact that we will all die a physical death at some point, God desires to accomplish a greater work in each one of us and through the Church than physical healing.  Our clue to this is that in Jesus’ list for John the Baptist of the evidence of his messiahship he included the preaching of the good news, specifically to the poor.  This was and is radical in a couple of ways, first because of the troubled times in which they were living and secondly because of the low estimation in which the poor were, and are, held.

So, I am saying that although healing of our physical, mental, and emotional problems is a very good and desirable thing, given that we will all die eventually anyway, perhaps there is something more important to look for.

For example, what is the nature of the good news?  There was not much good news in Jesus’ day, and there is not much good news today.  The Roman empire ruled the known world with an iron fist at the time and the Jewish religious establishment in Palestine was utterly legalistic in its approach to the people.  There was no mercy nor hope in the land and the more impoverished you were, the worse your prospects.

So, good news would be almost anything that was opposite to this, to the context of his listeners and our lives today.

What is that good news?  That in the eyes of God we matter, we count, and He loves us.  In His eyes we are forgiven for our shortcomings; we are loved unconditionally.  We are free from legalistic burdens; we don’t have to worry about perfection or being right.  We are free to love each other, to have hope in the goodness and power of God to make His plans the reality of the world.  We are free to quit worrying about the future.  We are free to enjoy the life we have.  And we are free to die in peace in God’s own good time, knowing that we do have a future that is in His merciful hands.

If we can make our way through life on this basis then we will not feel offended by this message that is so contrary to what we hear every day, including that faith does not make sense!  Indeed, it does not make sense if we believe we are the masters of our own fates, our society’s favorite myth!

However, both the people in Jesus’ time and we ourselves today tend to be seekers of novelty; our whole economy is geared to this!  Even in spiritual circles, people often desire to hear some exciting new angle on spiritual life.    An exciting new message, perhaps, that would also be a little entertaining?  Have you ever attended a gospel revival meeting for the entertainment?  I’ll admit that I have!  The music alone can be great!

Or, are we hoping for a beautiful lecture?  Or maybe just enough interest to not fall asleep since your husband or your wife is making you show up . . . .

Maybe they – we – thought that there would be a glib and beautifully dressed speaker delivering a perfectly polished TED talk.

Maybe they went to see if this strange new teacher was going to tell them something about the future, some news from beyond the current misery.  And yes, that turned out to be who John the Baptist was, a prophet with a message for which the whole world was actually waiting!  But what he predicted turned out to be so much more than the world had bargained for!  A merciless death, terrible religious upheaval, the known world turned upside down.

John the Baptist was heaven-sent.  He had a particular mission from God, to tell the world who Jesus was.  And yet, Jesus himself said that the least important person who has given their life over to the Kingdom of God is more important!  How are we to understand this?

It goes back to what we are looking for.

If you are looking for the Kingdom and how to be a part of that; if you are looking for God’s guidance for your life; if you are seeking to understand how to do the will of God because in the meantime you have realized that your own way simply doesn’t work – then you are on the threshold of the Kingdom and God will give you the gift of His spirit because He loves each one of us and is only waiting for us to be of this contrite heart, trembling at His word.

This is the birth of Christ in our hearts – our renewed life in Him – to which this season points us!  May we be looking for the right thing and may we find it!  Amen

Sylvia Olney – The Medicalization of Psychotherapy 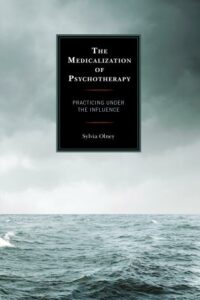